San Francisco Recorded Sales Activity In May: Down 16.0% YOY 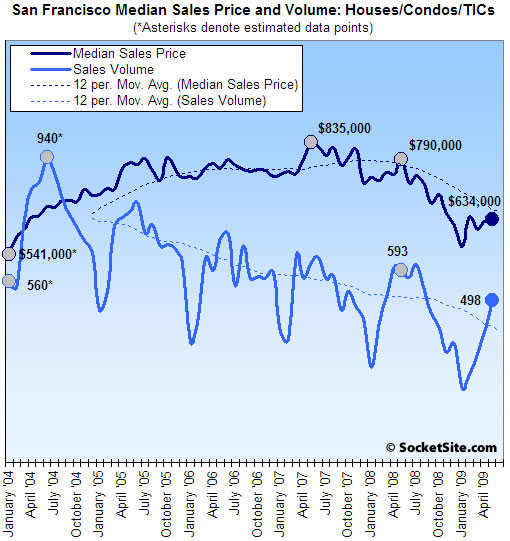 According to DataQuick, recorded home sales volume in San Francisco fell 16.0% on a year-over-year basis last month (498 recorded sales in May ’09 versus 593 sales in May ‘08) but rose 23.9% compared to the month prior. The difference between recorded and listed sales activity speaks to a spike in unlisted closings, up 46% YOY and generally new construction or bank-owned sales that we’ll once again characterize as being driven by discounting.
San Francisco continued to experience the sharpest year-over-year decline in sales volume of any Bay Area county in May with Marin the only other county recording a decline (-2.7%). San Francisco’s median sales price in May was $634,000, down 19.7% compared to May ’08 ($790,000) but up a nominal 0.9% compared to the month prior.
For the greater Bay Area, recorded sales volume in May was up 19.8% on a year-over-year basis and up 4.3% from the month prior (7,447 recorded sales in May ’09 versus 6,216 in May ’08 and 7,139 in April ’09), while the recorded median sales price fell 33.9% on a year-over-year basis, up 12.3% compared to the month prior (the second uptick in 18 months).

Last month 42.1 percent of all homes resold in the Bay Area had been foreclosed on in the prior 12 months, down from 46.4 percent in April and the lowest since the figure was 41.6 percent last September. A year ago the percentage was 27.7 percent, while the peak was 52.0 percent this February. By county, foreclosure resales ranged last month from 7.7 percent of all resales in San Francisco to 65.1 percent in Solano.

The use of government-insured FHA loans – a common choice among first-time buyers – represented a 24.5 percent of all Bay Area purchase loans in May, down slightly from a record of 26.0 percent in April but up from 7.3 percent a year ago.

Confidentially Speaking About The Infinity