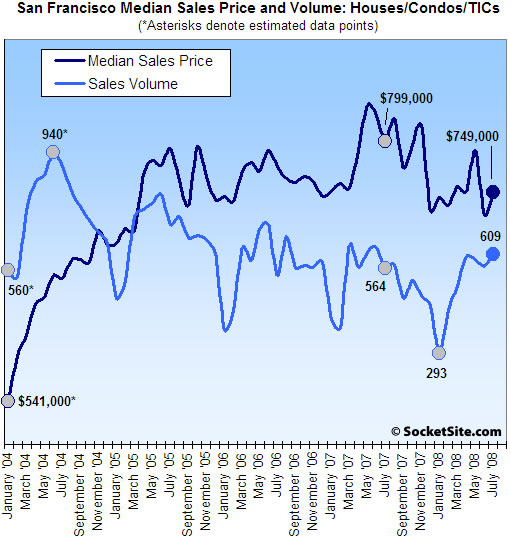 At the extremes, Santa Clara recorded a 13.1% year-over-year reduction in sales volume (a loss of 250 transactions) and a 16.4% decrease in median sales price, while Contra Costa recorded a 30.3% increase in sales volume (a gain of 502 transactions) but a 41.6% drop in median sales price (think foreclosures).
UPDATE: While the numbers are above, it’s worth highlighting the impact of foreclosures on sales volume last month. Not counting the resale of foreclosed properties, sales volume in the Bay Area actually dropped 28.5% from 2007 to 2008 (versus the 2.2% increase referenced above). And in San Francisco, we estimate the increase in year-over-year recorded sales volume for non-foreclosure properties to be closer to 4% (versus the 8% referenced above).
∙ Bay Area home sales climb above last year; median price falls hard [DQNews]
∙ San Francisco Recorded Sales Activity In June: Down 9.8% YOY [SocketSite]

555 Mission Rock: Yesterday, Today And Tomorrow (And A Recap)