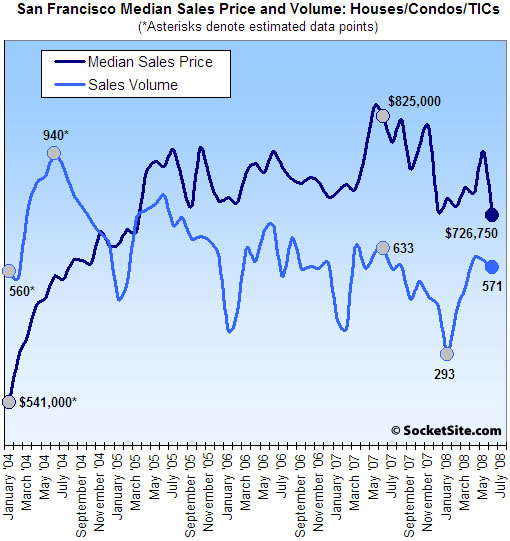 According to DataQuick, home sales volume in San Francisco fell 9.8% on a year-over-year basis last month (571 recorded sales in June ’08 versus 633 sales in June ‘07) and fell 3.7% compared to the month prior (See UPDATE below).
Keep in mind that DataQuick reports recorded sales which not only includes activity in new developments, but contracts that were signed (“sold”) many months or even years prior and are just now closing escrow (or being recorded).
San Francisco’s median sales price in June was $726,750, down 11.9% compared to June ’07 ($825,000), 8.0% compared to the month prior, and the lowest recorded median since March 2005. And yes, we’re doing some digging on the effect of mix.
For the greater Bay Area, recorded sales volume in June was down 9.9% on a year-over-year basis but increased 15.5% from the month prior (7,178 recorded sales in June ’08 versus 7,964 in June ’07 and 6,216 in May ’08). And the recorded median sales price fell 27.1% on a year-over-year basis (down 6.2% compared to the month prior and “the first time in more than four years that it was below the half-million mark”).
At the extremes, Marin recorded a 35.4% year-over-year reduction in sales volume (a loss of 124 transactions) and a 12.0% decrease in median sales price, while Contra Costa recorded a 14.6% drop in sales volume (a loss of 207 transactions) and a 36.7% drop in median sales price.
UPDATE: In our words this morning, it “seems a little strange” that sales volume would have been absolutely flat from May to June. And lo and behold, DataQuick has since adjusted the number down from 593 to 571 sales in June.
∙ Bay Area median price dives below $500K; sales near record low [DQNews]
∙ San Francisco Recorded Sales Activity In May: Down 3.7% YOY [SocketSite]

JustQuotes: Like Fluorescent Lighting In The Kitchen? (Wink, Wink)

But Hey, $550,000 Is Simply A Rounding Error To A Proper Industrialist