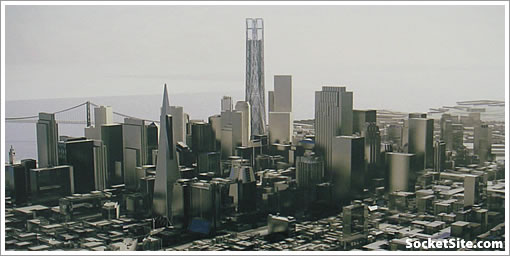 Keep in mind that design elements of all three proposals are likely to change (some rather dramatically) between now and the final selection on September 20th (and again between the final selection and construction). That being the case, a few highlights that caught our attention (in reverse order of the renderings we published yesterday):

Skidmore Owings and Merrill/Rockefeller Group Development Corporation Proposal:
Envisioned as “the center of San Francisco,” the SOM designed tower (above) will rise a total of 1,375 feet into the sky. The 175-foot “crown” of the tower will house dual wind turbines and photovoltaic screening, while the “self-healing” external brace frame (designed to redistribute load if compromised) will diffuse strong winds at ground level.

The mixed use tower is configured for 42 floors of residential (2/3/4 bedroom condos), 31 floors of office, and 8 floors of hotel space with a public sky lounge at the very top. A 103-foot high multimedia entry “portal” will usher people into the great hall and transit center below.

Both the tower and terminal are intended to be Platinum LEED certified.

Richard Rogers Partnership/Forest City Enterprises/MacFarlane Partners Proposal:
Designed to be a “kinetic rather than static” building (think elevators on the outside), and a “vertical representation of the city as a whole,” the Richard Rogers designed tower was also described as a “metaphor for sustainability” (a 170-foot wind turbine rises above the building’s restaurants and observatory located at 1,100 feet).

The mixed use tower is configured for 600,000 square feet of commercial space, 200-300 condominiums, and 200+ upscale hotel rooms. Both the tower and 1,300’ long terminal are designed to minimize walls on the ground level to maximize light, flow and natural circulation.

The tower is intended to be Platinum LEED certified and the terminal Gold.

And while the terminal may be complex (think a funicular rising through a grove of redwoods), it is balanced by a “simple and calm” 1,200-foot glass wrapped tower which is topped by four harmonic turbines (which variably light the top of the tower based on prevailing wind speeds). As proposed, the tower is singularly configured for 1.6 million square feet of commercial office space but could be reconfigured to include 22 floors of residential space “if required.”

Both the tower and terminal are expected to be LEED Gold certified (but could possibly achieve Platinum).

Note: Comments on the three proposed designs are being collected on yesterday’s post that featured the renderings for all three proposals.