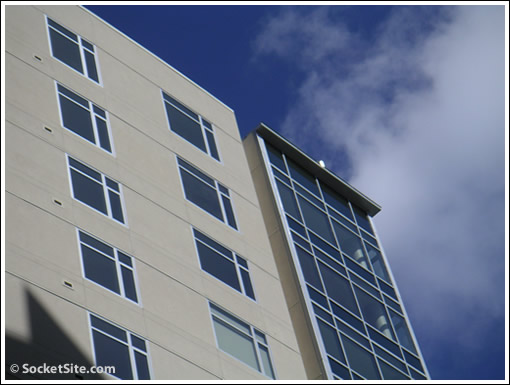 So here’s the official inventory update for Heritage on Fillmore: 37 of 68 market rate condos “sold” (with 10 already having closed escrow and moving in) and 31 available (now starting at $600,000). That’s 27 arms length transactions over the past five months (plus 10 developer units that were reserved for friends and family), and a total of 61% “sold” when including the 12 BMR units.
Our pick (and the inside scoop): the 12th floor two bedroom floor plan B (~1,400 square feet and officially known as PH1-B) which was in contract but is returning to the market at $1,100,000. We’re partial to the separated bedrooms, walls of windows and views (yes, columns and all), but we would budget for a bit of upgrading in the kitchen and bathrooms (both of which would be fine in a lower priced unit).
And in terms of the restaurants/clubs in the building, Yoshi’s San Francisco is expected to open in October while the Blue Mirror (a white tablecloth French-Southern concept by an ex-chef of the Carnelian Room) could open its doors as early as September. Two welcome additions to the neighborhood.
∙ Heritage on Fillmore (1300 Fillmore): Status And Sales Update [SocketSite]
∙ Heritage On Fillmore: The VIP Scoop [SocketSite]
∙ A Reader’s “5 Suggestions To Turn Around Fillmore” [SocketSite]

Rumor Has It: Four Offers On The 2007 Decorator Showcase Home?