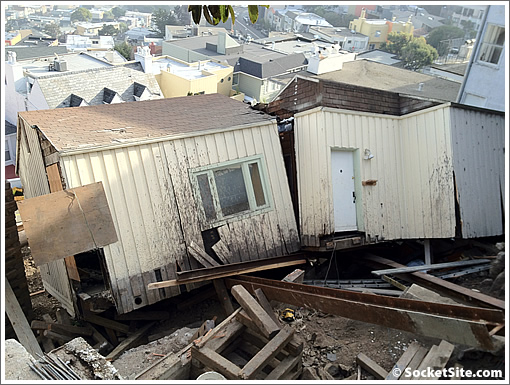 A report by Department of Building Inspection chief Tom Hui cites “[a failure] to follow and implement the approved plans and the sequence of construction” for leading to the collapse of 125 Crown Terrace in December.

The Twin Peaks home was being supported by three reinforcing towers at the time of the collapse, rather than nine as specified in the approved building plans. Developer Mel Murphy, the former president of the Building Inspection Commission, blames the collapse on a steel beam failure between the three supports and contends the additional six towers were to be put in place the next day, according to the Chronicle.

Murphy’s original application for the “remodeling” stated a project cost of $60,000, a figure that was first upped to $300,000 and then to $610,500 in early December following an anonymous complaint. The estimated project cost, based on which permit fees are figured, was upped to $1.57 million at the end of December.

According to Murphy’s business partner, Luke O’Brien, the low-ball project cost estimates were not a premeditated attempt to cheat but rather “a mistake” that the Department of Building Inspection should have caught, and “that’s always the way it’s done.”

Bay Area Home Sales Off To A Slow Start In 2014