Planning For A CVS: The Designs For 2280 Market Street

While San Francisco’s Planning Commission shot down Starbucks proposal to renovate and occupy the retail space at 2201 Market Street, in part based on the Planning Department’s concerns with respect to the concentration of formula retail in the area, this week the Commission is expected to approve the application for CVS to renovate and occupy a long vacant retail space at 2280 Market Street, roughly 400 feet away from 2201 Market.
As proposed, four of the Market and Noe Center’s protruding concrete bays will be removed and CVS’s section of 2280 Market Street’s concrete façade will be over-clad with cement-board siding, a metal lattice, and metal trim (click the design to enlarge).

The metal lattice will mark the entrance and screen the existing parking deck and new elevator penthouse on the roof which would reopen with the CVS. The second floor of the building would be renovated as well but remain availble for another retail or office use. 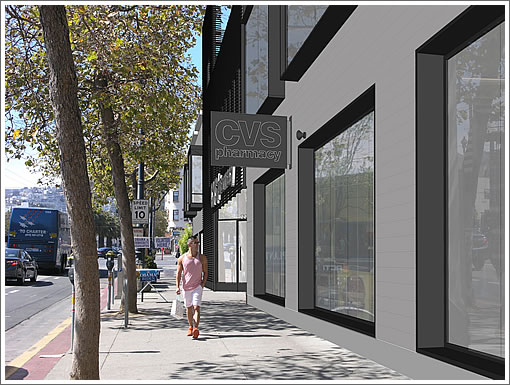 While noting that there are two pharmacies in the Upper Market Street districts “providing a similar mix of retail goods” within a half-mile of the proposed CVS, the Planning Department recommends approval of the project as it “would provide an additional choice of pharmacy and basic everyday needs goods for neighborhood residents, resulting in prices that are more competitive and a greater availability of goods and services.”
Keep in mind that as part of their argument against Starbucks’ proposal, the Planning Department noted, “The Upper Market NCT is [already] well served by existing similar eating and drinking establishments that are considered coffee houses, including Church Street Café, Peet’s Coffee & Tea, Sweet Inspiration and Café Flore.”
Assuming approvals and quickly issued permits, CVS hopes to renovate and open the store at 2280 Market Street by February 2014 with Radio Shack, and Radio Shack’s section of building facade, remaining in place.
Having sat mostly vacant since Tower Records vacated the space over six years ago, Trader Joe’s withdrew their application to open at the Market and Noe Center back in 2011 due to concerns over parking.
∙ Starbucks’ Market Street Plan Shot Down By Planning [SocketSite]
∙ The Designs For 2201 Market Street And Great Starbucks Divide [SocketSite]
∙ Trader Joe’s Withdraws Application For Castro Store [SocketSite]

Victorian Era Disco Steps: Can You Feel The Fever?