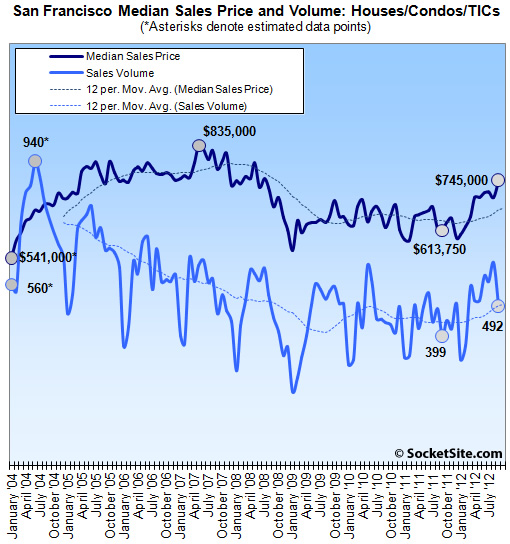 An August-to-September sales decline is normal for the season, although last month’s drop was exaggerated because the month started and ended with a weekend and had fewer business days. Sales for the month of September have varied from 5,014 in 2007 to 13,343 in 2003, while the average for all months of September since 1988, when DataQuick’s statistics start, is 8,572.

Home flipping has picked up this year. The number of Bay Area homes that sold twice on the open market within a six-month period rose to 3.9 percent of all homes sold in September. That was up from a flipping rate of 3.6 percent in August and up from 2.7 percent a year earlier.

At the extremes, San Francisco recorded the greatest increase in Bay Area sales volume while Solano recorded an 11.4% decrease (a loss of 69 transactions) on a 2.6% increase in median sales price, the lowest in the Bay Area. The median sales price increased 27.0% in Contra Costa with a nominal 0.6% increase in sales volume.
As always, keep in mind that DataQuick reports recorded sales which not only includes activity in new developments, but contracts that were signed (“sold”) many months or even years prior and are just now closing escrow (or being recorded).
∙ Bay Area Median Highest in Four Years [DQNews]
∙ August San Francisco Home Sales Highest Since 2006 [SocketSite]
∙ Medians Are Up, But Don’t Confuse That With Increasing “Prices” [SocketSite]