A Year Later, 350 Eureka Returns With Plans For Much More 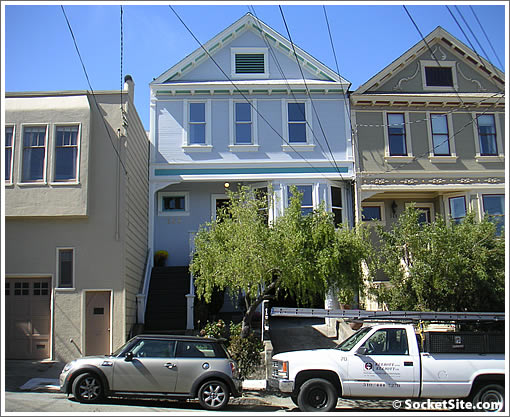 We typically won’t feature a property as an “apple” once it’s in contract or has already closed escrow as it promotes a selection bias, but we do like year-over-year data. And two weeks ago a tipster did suggest we keep an eye on this one.
Purchased for $1,403,500 in August 2010, a permit to convert the attic at 350 Eureka into a master suite, renovate the kitchen, add a new garage out front and expand out back has since been filed and plans have been drawn up, but the property returned to the market two weeks ago prior to any of the proposed work.
Listed for $1,495,000 on September 8, the Eureka Valley home went into contract on September 23 but contingencies have yet to be waived. We’ll keep you plugged in.
UPDATE (9/28): A plugged-in tipster reports: “This property is now out of contract. Apparently, the potential buyers could not afford the renovations and secure financing.”
∙ Listing: 350 Eureka (4/2) 1,720 – $1,495,000 [MLS]

The Renderings For What’s Rising At 1150 Ocean Avenue