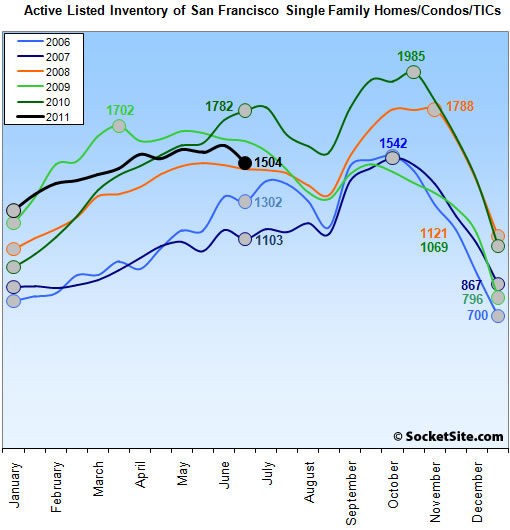 Inventory of listed single-family homes, condos, and TICs in San Francisco fell 5.9 percent over the past two weeks to 1,504 active listings. Over the past five years, listed inventory levels in San Francisco have dropped an average of 1 percent from the middle of June to beginning of July.
Current listed inventory is down 16 percent on a year-over-year basis, up 3 percent versus the average of the past five years, up 16 percent as compared to an average of 2006 and 2007. The inventory of single-family homes for sale in San Francisco is down 7 percent year-over-year to 630 listings while listed condo inventory is down 16 percent to 874.
The percentage of active listings in San Francisco that have undergone at least one price reduction ticked up one point to 37% as the percentage of active listings that are either already bank owned (92) or seeking a short sale (223) ticked up a point to 21 percent, unchanged on an absolute basis over the past two weeks.
The standard SocketSite Listed Inventory footnote: Keep in mind that our listed inventory count does not include listings in any stage of contract (even those which are simply contingent) nor does it include listings for multi-family properties (unless the units are individually listed).
∙ San Francisco Listed Housing Inventory Update: June 20, 2011 [SocketSite]

A Magnificent Mediterranean Marina Home Falls Into Our Apple Cart