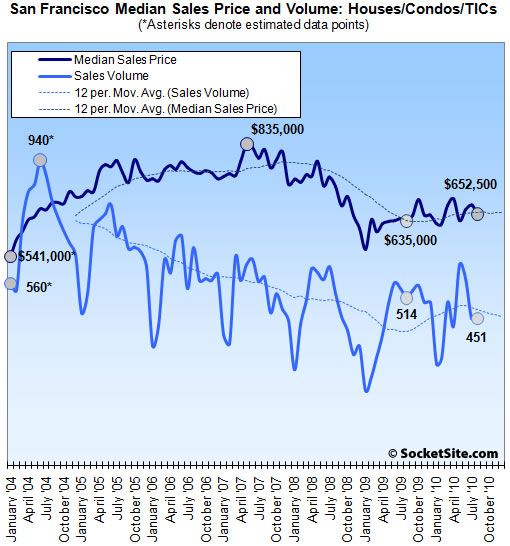 Government-insured FHA loans, a popular choice among first-time buyers, accounted for 24.2 percent of all home purchase loans in August, up from 23.3 percent in July but down slightly from 24.8 percent in August 2009.

At the extremes, Solano recorded a 19.9% drop in sales volume (a loss of 135 transactions) on a 1.0% increase in median sales price in August while Marin recorded a 12.8% decline in sales volume (a loss of 30 transactions) on a 9.0% decrease in median.
As always, keep in mind that DataQuick reports recorded sales which not only includes activity in new developments, but contracts that were signed (“sold”) many months or even years prior and are just now closing escrow (or being recorded).
∙ Bay Area Home Sales Drop to 1992 Level; Median Price Slips Again [DQNews]
∙ San Francisco Recorded Sales Activity In July Falls 16.8% YOY [SocketSite]
∙ He’s It’s Back: California’s $10,000 Homebuyer Tax Credit Returns [SocketSite]