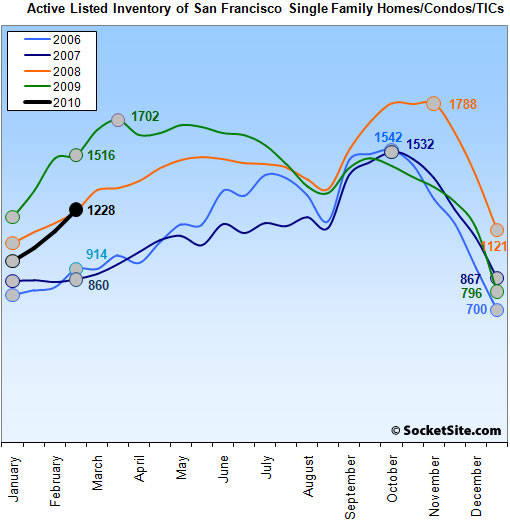 Inventory of Active listed single-family homes, condos, and TICs in San Francisco is up 10% over the past two weeks. Current inventory levels are down 19% on a year-over-year basis, up 34% as compared to 2006, and up 8% versus the average of the past four years for this time of year (up 19% if you exclude 2009).
27% of active listings in San Francisco have undergone at least one price reduction with the percentage of active listings that are either already bank owned (59) or seeking a short sale (115) falling to 14% on an absolute drop of 2% (4 listings) over the past two weeks.
The standard SocketSite Listed Inventory footnote: Keep in mind that our listed inventory count does not include listings in any stage of contract (even those which are simply contingent) nor does it include listings for multi-family properties (unless the units are individually listed).
∙ SocketSite’s San Francisco Listed Housing Inventory: 2/16/10 [SocketSite.com]

214 Arguello Closes 5 Percent Under Asking (But Down 29 Percent)