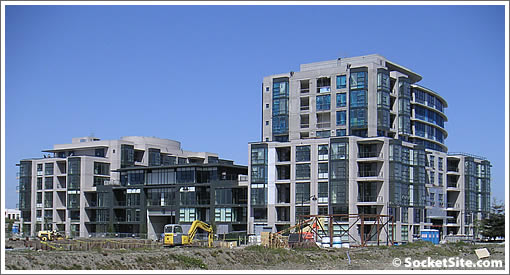 The model units for the first phase of Radiance At Mission Bay (325 China Basin Blvd) officially open their doors to the public this weekend (with a VIP “sneak peek” tonight). As you might recall, the offsite sales office for Radiance opened a year ago with a bit of a bang. From a reader who was there:

I was there last evening around 430pm. The sales staff was great but I was stunned to hear they are actually over 75% reserved. The agent stated they sold 44 units on Saturday so i am guessing they were about 30 sold on Sunday. They had 3 agents all with people still and they were not closing for 2 more hours. Stunning to see basically the entire building purchased in one weekend.

As we pointed out at the time, however, early reservations simply represented $10,000 fully refundable deposits. After moving to hard (non-refundable) deposits a few months later, around 50% of the 99 units were in contract. And as far as we know, there hasn’t been a significant amount of movement in either direction since.
Occupancy is expected this summer with Phase II sales (316 units in two 16-story towers) following soon thereafter. Perhaps seeing will be believing.
∙ Radiance At Mission Bay: Sales Office Open [SocketSite]
∙ Radiance At Mission Bay: Around 50% In Contract (And Conversion)? [SocketSite]

And After the Power Outage And Subsequent Storm…A Pool!