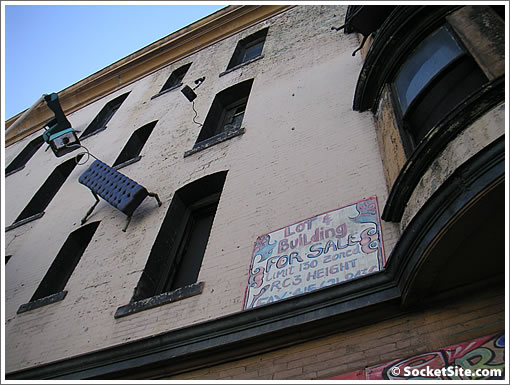 With an assessed tax value of $474,894 (despite an estimated value of at least $3,250,000), and a yearly tax contribution of only $7,269.58, yesterday’s post concerning the Hugo Hotel quickly turned into a debate over propostion 13 (which we’ll let rage on).
But for those who might be more interested in a discussion about the actual building, we’ll offer up a select few comments to get things started:

“Patel cites the building’s 50-foot height restriction as a way for the city to keep her property’s value low. “It is unfair that I don’t have the same development opportunities as everyone else,” she says by way of explanation for the property’s dilapidated state.”

“They’ve always marketed the building touting it’s high zoning height limit which is just absurd. It’s barely feasible to develop in a sketchy location like that and it gets less feasible the taller the building as your development costs go way up when you switch from wood frame to concrete and steel construction at over 4 stories.”

“The reason this eyesore remains is that David Patel is impossible to deal with. The last time I tried, he said he wanted $50,000 up front to talk.”

“Practically the entire south of market has a 50′ height limit, and it has for decades. Drop all your conspiratorial theories. In fact, the Planning Dept has proposed raising the height limit in that vicinity to 85′.”

And now back to the building in specific (or at least eminent domain in general).
∙ JustQuotes: Eminent Domain For Affordable Housing On Sixth Street? [SocketSite]
∙ Artwork for sale, and so is building [SFGate 9/06]

A New Incentive At The Potrero: Six Months No Mortgage Payment