More Height and Housing in the Mission and Planning’s Thoughts 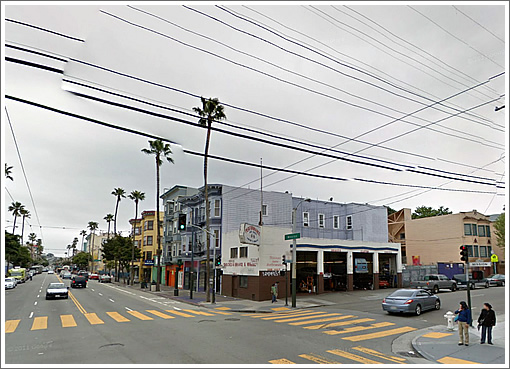 Purchased for $1,300,000 three months ago, plans to demolish the auto repair shop at 1900 Mission Street on the corner of 15th and construct a six-story building with nine dwelling units, eight parking spaces, 650 square feet of ground floor retail and 1,670 feet of office space on the second floor have been quietly submitted to San Francisco’s Planning Department for review.

Finding that the use and massing are appropriate for the site in general, the Planning Department did provide the following comments with respect to the preliminary design:

The Planning Department appreciates the height given to the ground floor, and suggests that more could be done to allow that to be apparent. A means of achieving this may include reducing the depth of the horizontal band and adding height to the storefront. The horizontal banding at the top of the ground floor provides a strong base defining feature, however to augment the articulation of the facades, the ledge should not project further than approximately 6 inches.

In general, the repetitive elements along the Mission street façade should be executed with exceptional materials and detailing. While the bay spacing is extremely rigorous, some thought should be given to alternative spacing and groupings of the bays. The detailing should serve to further the architectural themes and impart scale and texture to all visible facades. Windows should be recessed from the exterior by a minimum of 2 inches.

Please consider adding functional aspects that contribute to the façade composition and details, such as Juliette balconies, and brise-soleils [and] consider using the bay projections to help terminate the building at the roof, perhaps incorporating the rhythm into the parapet system.

More should be made of the corner. The corner should receive an improved treatment other than the proposed opaque wall. The Planning Department recommends the corner be expressed with a distinct design treatment, differentiated from the body of the building, while still relating to the massing, proportions, and scale of the rest of the building. It may be desirable to combine the bays at the corner to achieve this effect. Alternatively, consideration could be given to emphasizing the Mission Street height and façade as a distinct architectural element, perhaps with more transparency and less austerity, which could achieve a similar effect.

The existing lease for the operators of the garage expires on March 31, 2014.