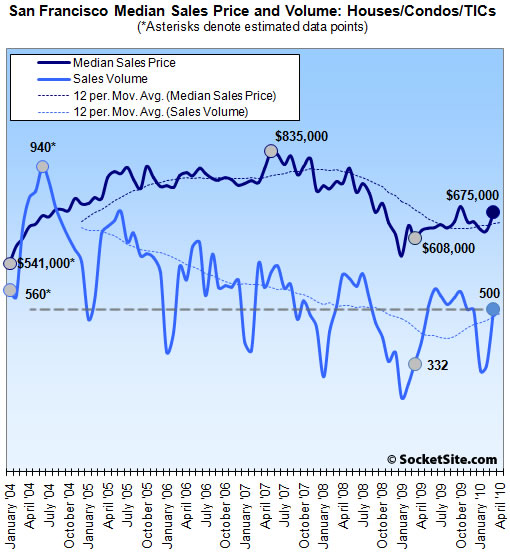 As sales of lower-cost foreclosures have tapered off over the past year, sales in many mid-to high-priced neighborhoods have picked up, helping to explain why the median sale price has posted double-digit annual gains of late. Last month 34.6 percent of the homes sold in the Bay Area were priced $500,000 or above, up from 32.6 percent in February and 24.1 percent a year ago. However, $500,000-plus sales still lag their five-year monthly average of 53.3 percent of all sales and their 10-year average of 46.0 percent.

Within the Bay Area, San Francisco recorded the greatest year-over-year increase in March sales volume while Contra Costa recorded a 13.8% decline (a loss of 281 transactions) on a 25.0% increase in median sales price. Only Napa county recorded a year-over-year decrease in median sales price (-3.4%).
As always, keep in mind that DataQuick reports recorded sales which not only includes activity in new developments, but contracts that were signed (“sold”) many months or even years prior and are just now closing escrow (or being recorded).
∙ Bay Area March home sales and median price rise [DQNews]
∙ San Francisco Recorded Sales Activity In February: Up 20.2% YOY [SocketSite]