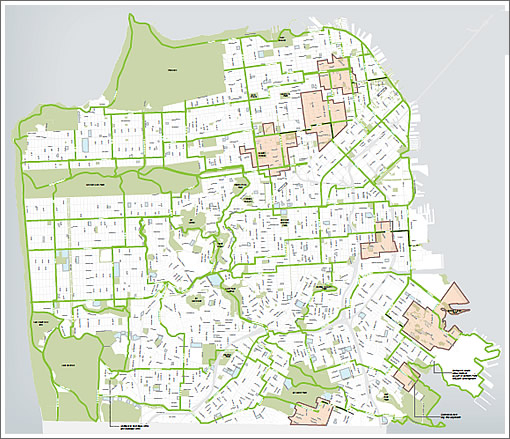 The final map for 115 miles of walking and biking paths to crisscross San Francisco will be officially unveiled next week on December 4, along with the conceptual plans for the first six “Green Connections” in the Bayview, Chinatown, Potrero Hill, Tenderloin, Visitacion Valley, and Western Addition neighborhoods.

As we first reported last year when the draft map and 25 proposed routes were announced, the goal of San Francisco’s Green Connections project is to improve non-motorized access to San Francisco’s parks, open space and waterfront by re-envisioning target City streets and paths as a network of ‘green connectors’ to be landscaped, traffic calmed, and improved for pedestrian and bicycle access over the next twenty years.

Moving Fast In San Francisco, But Even Faster In San Jose