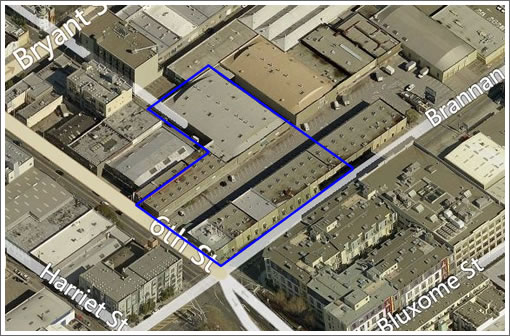 While the site of the two-story San Francisco Flower Mart complex is currently zoned for development up to 55 feet in height, as part of Planning’s Central Corridor Plan the parcel could be up-zoned for heights of up to 65 feet (the “Mid-Rise Alternative”) or even 85 feet (the “High Rise Alternative”).

That being said, with plans for a mid-rise residential development on the site having fallen through in 2005, an ambitious new plan to raze 46,000 square feet of the Flower Mart and build a pair of office buildings rising up to 160 feet at the corner of Sixth and Brannan has been drafted and quietly submitted to Planning for their reaction.

The project would also include an extension of Morris Street from Bryant to Brannan via new a pedestrian walkway.
The Planning Department’s initial reaction to the project and proposed heights:

The proposed heights significantly exceed what is allowed under the current zoning. The proposed heights also significantly exceed what is envisioned in the proposed Central Corridor Plan area for this site. The basic urban form and land use principles of the draft Central Corridor Plan are for a predominant mid-rise (55-feet to 130-feet tall) district with large floor plate character combined with strategically located and widely-spaced slender towers near key transit stops, with heights tapering down to Western SoMa (i.e. toward Sixth Street). Building heights as proposed will need extensive shadow, view, skyline, and immediate context analysis to assess the appropriateness of their heights, bulk, and spacing.

The Planning Department recommends the height of the eastern most building not exceed 85 feet tall per the proposed height limits; the building wing to the west should be sculpted to step down to Sixth Street and should not exceed 65 feet in height.

The Department does, however, support the development of a publicly accessible mid-block alley connecting Brannan with Morris (“as wide as the Morris Street right-of-way”) and “recommends preserving the possibility of accommodating a new alley connecting Sixth Street to Morris Street and any future alley network typical of SoMa blocks.”

In order for the project to proceed as proposed, the Board of Supervisors would need to approve a Height District Reclassification for the subject parcel. As the Board approved an up-zoning for the development of 8 Washington, why not here as well?

Van Ness Bus Rapid Transit (BRT) Could Be Rolling By 2018