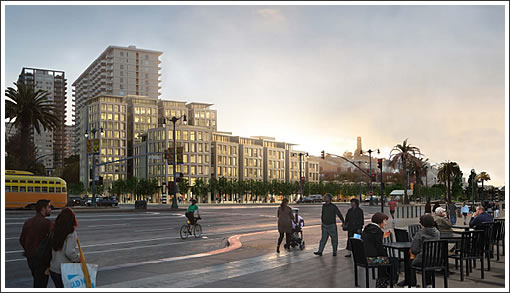 Returning from their summer recess yesterday, San Francisco’s Board of Supervisors voted to uphold their previous approval for the proposed 8 Washington Street project. As such, the qualified referendum to quash the development of 8 Washington as approved, or at the very least limit its height to 84 feet, will now head for the ballot box.

With the August 10 deadline for adding new measures to this November’s ballot having since passed, however, the referendum which was financed by neighbors whose views would be blocked will land on the November 2013 ballot save a costly special election. In the meantime, any physical work on the project will remain on hold until after the public votes.

As we noted last month, should the upzoning be overturned at the ballot box, the project might still be viable at 84 feet, but don’t expect anyone to admit to such right now.

We'd Guess They Didn't See This One Coming Over At The St. Regis