Mayor Lee To CPMC: Save St. Luke’s Or Cathedral Hill Campus Is DOA 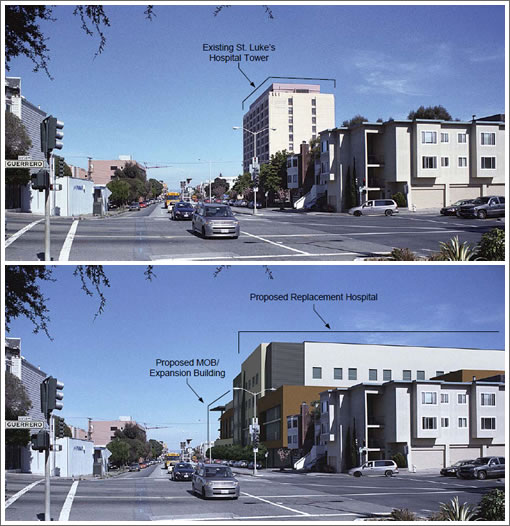 With the appeal of Planning’s approval of CPMC’s comprehensive development plans having been pushed to next week, and new fears that CPMC isn’t committed to the long-term operation of its St. Luke’s campus in the Mission, Mayor Lee is reported to be seeking CPMC’s agreement to keep St. Luke’s in operation for at least 20 years, without which the Mayor will kill CPMC’s plans for its Cathedral Hill campus in San Francisco.

UPDATE: In a press conference this morning, CEO Warren Browner intimated CPMC had no intentions of signing an amended development agreement, including a guarantee for the ongoing operation of St. Luke’s.

“We are committed to building (St. Luke’s) here that we hope will stay open forever,” Browner said, but “we stand for the development agreement as written.” He acknowledged “circumstances” could alter that rosy view, insisting that CPMC’s success — and the reason it’s one of the survivors of what was once a much larger roster of hospitals in town — is that it takes its financial obligations “extraordinarily seriously.”

Also intimated and noted by The Business Times, “the city’s failure to approve a development agreement hammered out over a decade and approved by the city’s Planning Commission in April, could result in St. Luke’s closure and the departure of its medical staff.”