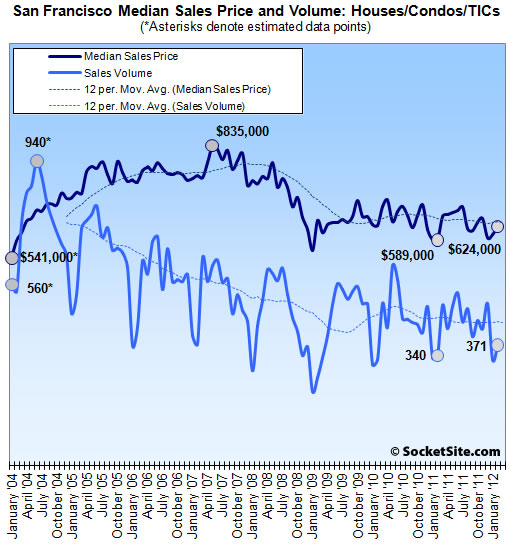 The market is still strange, just a little less strange than it was. We also need to keep in mind that, when it comes to statistical trends, February is the least typical month of the year. Over the winter you’re left with a higher concentration of investors and people who must buy or sell because of a major life event. In the spring, when many traditional buyers return, we’ll get a much better read on the market.

At the extremes, Alameda recorded a 33.3% increase in sales volume (a gain of 298 transactions) on a 5.4% decline in median sales price, while Sonoma recorded a 4.5% decrease in sales (a loss of 18 transactions) on a 0.2% drop in median price. The median sales price in Marin increased 7.6%, the biggest Bay Area gain, as sales increased 15.3%.
As always, keep in mind that DataQuick reports recorded sales which not only includes activity in new developments, but contracts that were signed (“sold”) many months or even years prior and are just now closing escrow (or being recorded).
∙ Bay Area February Home Sales at Five-year High [DQNews]
∙ Recorded San Francisco Sales Fall 1.8% In January, Median Ticks Up [SocketSite]

Over Asking and 2008! (Not Including a Million in Upgrades)

Cain Records A Pre-Season Loss Over In Noe