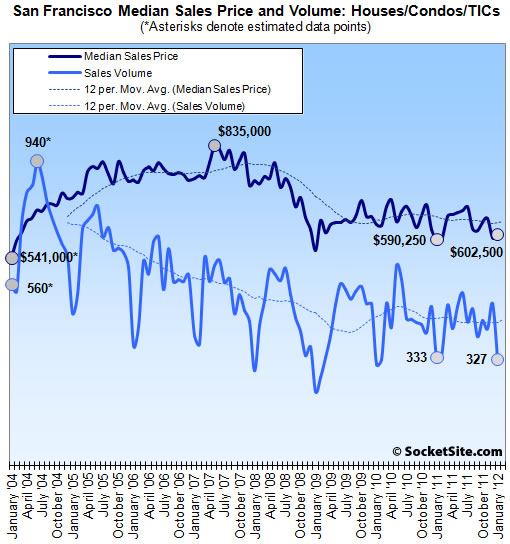 Last month distressed property sales – the combination of foreclosure resales and “short sales” – rose to 51.9 percent of the Bay Area resale market. That’s up from 48.5 percent in December and down slightly from 54.5 percent in January 2011.

Short sales – transactions where the sale price fell short of what was owed on the property – made up an estimated 23.9 percent of Bay Area resales last month – the highest for the current housing cycle. That was up from 20.7 percent in December and up from 19.5 percent a year earlier.

At the extremes, Sonoma recorded a 29.8% increase in sales volume (a gain of 97 transactions) on a 4.2% decline in median sales price, while Napa recorded a 21.2% decrease in sales (a loss of 25 transactions) on a 5.6% increase in median price. The median sales price in San Mateo dropped 7.8% as sales increased 17.7%. Only San Francisco and Napa counties recorded year-over-year declines in sales volume.
As always, keep in mind that DataQuick reports recorded sales which not only includes activity in new developments, but contracts that were signed (“sold”) many months or even years prior and are just now closing escrow (or being recorded).
∙ Bay Area Housing Market Logs Higher Sales, Lower Prices [DQNews]
∙ San Francisco Sales Activity Ticks Up In December, Median Ticks Down [SocketSite]