First proposed for development in 2006 but met with resistance, the plans to construct single family homes on three of the twelve vacant Bernal Heights lots between Brewster, Holliday and Joy Streets are back in front of the Planning Commission this week. 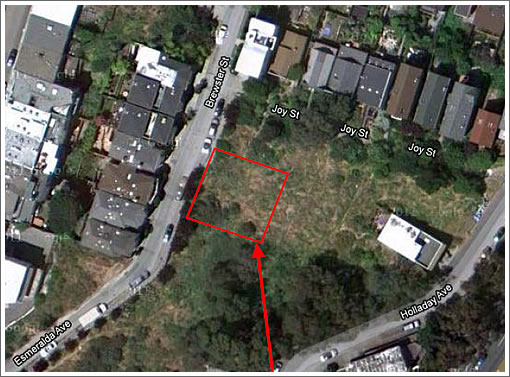 As proposed, the three new homes to rise between 183 and 191 Brewster will be two stories at the street and step down the lot in the rear for a total of four stories at the rear, ranging from 2,165 to 2,231 square feet and with a single curb cut and two-car garage per home. 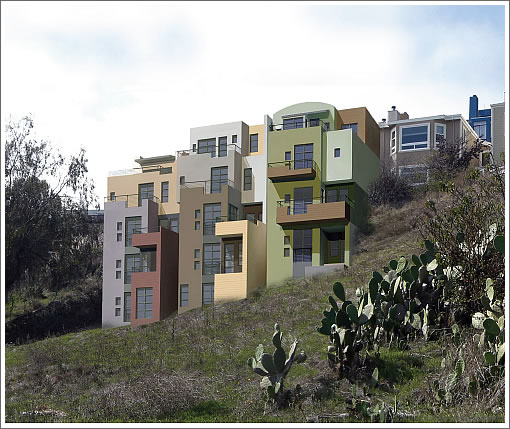 The Bernal Heights East Slope Design Review Board continues to oppose the project, raising the following concerns and requesting a Discretionary Review:

1. Exceptional and extraordinary circumstances exist because of the unique location on an extremely steep hill with very narrow and winding Street access and inadequate infrastructure.

2. An early proposal by one owner for the twelve vacant lots on the parcel was for nine houses. CEQA should be applied to a parcel this large, even if the project before you is now piece-mealed down to three houses.

3. The impact on neighborhood character by the bulk of the buildings which will be five stories high on the east side, towering over other houses on the block.

4. The removal of street parking on Brewster Street affects houses on the block which have no street for parking.

5. The insufficient infrastructure that makes emergency vehicle-access a life-safety issue. And the proven insufficient hydrant water pressure that was apparently not upgraded when other street work was done several years ago. The City street construction project was restricted to only serving the existing houses, thus the narrow (21-feet wide) street.

Inside The "Modernist-Inspired" House Atop The Cumberland Steps