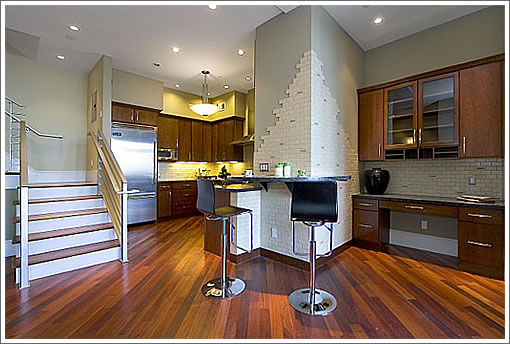 As we wrote in July:

This past Thursday the sale of 647 Grand View #1 closed escrow with a reported contract price of $1,043,200 ($450 per square foot). That’s 14 percent under its last original list price, 44 percent under what it was refinanced for in 2007, and 52 percent under the average sale price per square foot of its sister units three years ago.
Don’t forget, “This property originally came on the market in spring of ’07 for $2.4 million.”
Also closing escrow last week, the sale of 1471 Francisco on 10/13 with a reported contract price of $905,000. That’s 1 percent over asking, 3 percent over its 2004 price, and 11 percent under what was owed.
∙ Now Asking Under Five Hundred A Foot For Three Bedrooms Atop Noe [SocketSite]
∙ A New High For Distressed Listings In San Francisco [SocketSite]
∙ A Grand Fall For 647 Grand View Atop Noe Valley [SocketSite]
∙ A (Grand) View To A (Comp) Kill [SocketSite]
∙ Who’s Down With OPM In The Marina? [SocketSite]

140 Saint Germain: Rendered Meat On The Bones And Coming Soon