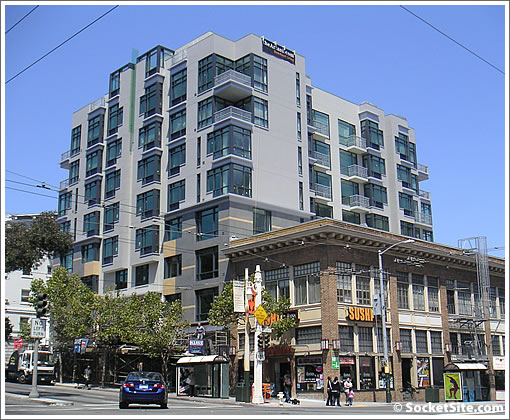 They are setting up a sales office on the ground floor in the permanently vacant (so far) retail space. I am still a tenant here and will not be exercising my first right of refusal as I believe the price and HOA fees are just too high.

They plan on selling floors 2-6 first. The cheapest units are at the front of the building on the 2nd floor (no side windows as it shares a wall with the sushi joint. Floors 7-8 are done to a higher spec. Seems a majority of the building is empty now. Most tenants moved in about a year ago and their leases ended. There has been a revolving door of moving trucks here in the last 3 months.

Also, they have a bunch of maintenance folks fixing up the units for sale after a tenant vacates. They will all be in near perfect condition. I’ve had a walk through some of the staged units and they look great.

A (Once Again) Remodeled 2219 Pacific Is Unwrapped