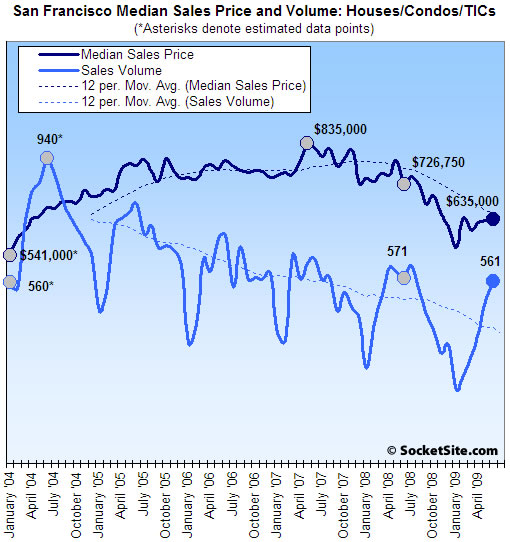 Use of government-insured FHA loans – a common choice among first-time buyers – represented 24.1 percent of all Bay Area purchase loans in June, down from a record 26 percent in April but up from 10.7 percent a year ago.

At the extreme, Solano recorded a 66.5% year-over-year increase in sales volume (a gain of 340 transactions) on a 38.3% drop in median sales price.
As always, keep in mind that DataQuick reports recorded sales which not only includes activity in new developments, but contracts that were signed (“sold”) many months or even years prior and are just now closing escrow (or being recorded).
∙ Bay Area home sales and median price rise [DQnews]
∙ San Francisco Recorded Sales Activity In May: Down 16.0% YOY [SocketSite]
∙ San Francisco Listed Sales Volume In June: Down 14% YOY [SocketSite]
∙ Infinity Sales Update: New Contracts Up But Driven By Discounts [SocketSite]