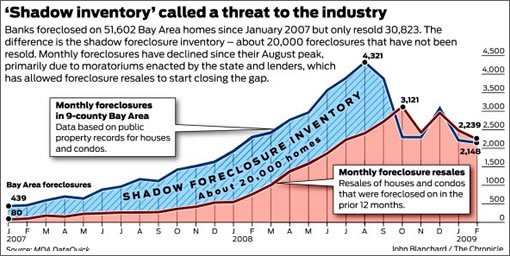 Carolyn Said takes a stab a calculating the Bay Area’s “shadow inventory” of foreclosure homes – propeties that have already been foreclosed upon but have not yet been registered in county records as having been resold.

For the 26 months from January 2007 through February 2009, banks repossessed 51,602 homes and condos in the nine-county Bay Area, according to DataQuick. Yet in the same period, only 30,823 foreclosures were resold, leaving about 20,000 bank repos unaccounted for.

The county with the highest percentage of unaccounted for foreclosures? According to the Chronicle that would be San Francisco with 50.2% unsold versus an average of 34.5% for the Bay Area as a whole.
UPDATE: As noted, according to the Chronicle’s analysis 50.2% of properties that have been foreclosed upon in San Francisco from January of 2007 through February of 2009 remain unsold and constitute “shadow inventory.”
Based on our back of the envelope calculations, roughly 750 properties in San Francisco County became bank owned during that 26 month stretch. And as such, the Chronicle’s methodology would suggest around 375 bank owned units are unaccounted for.
At least 69 of those bank owned properties, however, are accounted for and currently listed for sale in San Francisco. And while 69 is not 375, it is a swing of roughly nine percentage points in terms of the percentage San Francisco foreclosure inventory that’s out in the open versus possibly lurking behind. No update for the Bay Area as a whole.
∙ Banks aren’t reselling many foreclosed homes [SocketSite]