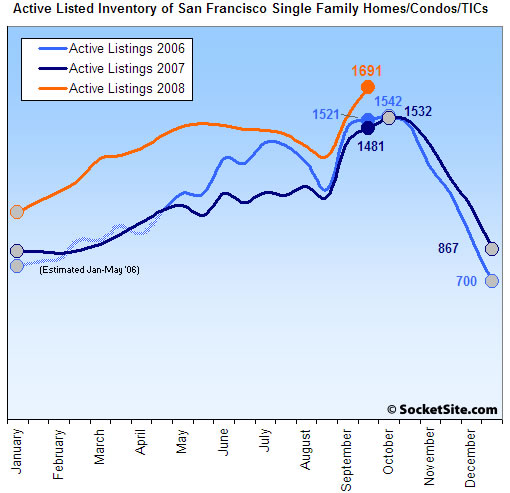 Inventory of Active listed single-family homes, condos, and TICs in San Francisco continued to climb over the past two weeks, briefly broke through the 1,700 units mark, and is currently running 14.2% higher on a year-over-year basis.
At the same time and based on our calculations, the number of new contracts written for listed properties in the fourth week of September was down roughly 25% as compared to the year prior (which was down roughly 17% as compared to the year prior to that), and is running roughly 22% lower on a year-over-year basis with respect to the last two weeks of the month.
The standard SocketSite Listed Inventory footnote: Keep in mind that our listed inventory count does not include listings in any stage of contract (even those which are simply contingent) nor does it include listings for multi-family properties (unless the units are individually listed).
∙ SocketSite’s San Francisco Listed Housing Inventory Update: 9/15/08 [SocketSite]

152 Banks In Bernal Heights Reduced (And Not Moving So Fast)