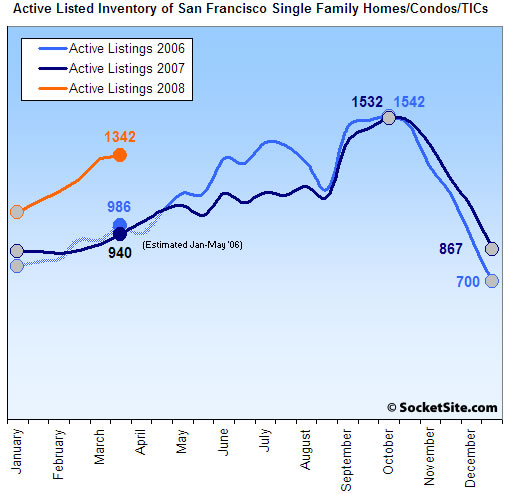 The inventory of Active listed single-family homes, condos, and TICs in San Francisco increased slightly (1%) over the past two weeks and is currently running 43% higher on a year-over-year basis. And the percentage of Active listings that have been reduced at least once has increased from 21% to 29% (195 versus 384) on a year-over-year basis as well.
Keep in mind that our listed inventory counts do not include listings in any stage of contract (even those which are simply contingent) nor do they include multi-family listings (unless the units are individually listed). And once again, reports of decreasing inventories in San Francisco proper are either incorrect or possibly refer to a decrease from the levels of last October which would not reflect the market’s seasonality.
∙ SocketSite’s San Francisco Listed Housing Inventory Update: 3/17/08 [SocketSite]

A Clean Compliment To The Edwardian Character Of 1205 Cole